In a secluded corner of Africa in the Animal Kingdom is the harambe Theater, which is home to The Festival of the Lion King.

The 30 minute show combines fabulous live singers, dancers and acrobats with large animatronic floats of your favourite characters from the film, and involves the whole family with audience participation and an open invitation to sing along!

The theater is set up in the round (or square, in this case), with each of the four sides being allocated an animal sound to pipe up during the performance. The layout of the set also means that everyone has a great view of the spectacular Tumble Monkeys, fire dancing and, not to mention, Timon strutting his stuff around the floor; he’s such a diva.. 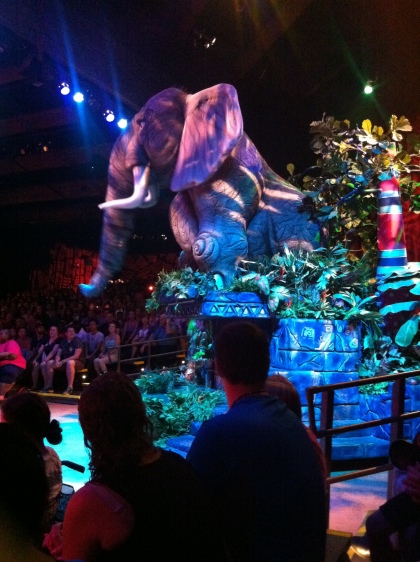 Unlike the smash Broadway and West End musical, the show doesn’t actually tell the story of the Lion King, it just celebrates the best songs including The Circle of Life, Be Prepared and The Lion Sleeps Tonight, but with the showstopping cast, incredible costumes and amazing sets, you’re definitely missing out if you don’t check it out for yourself!