So this morning I actually allowed myself that lie in I mentioned yesterday, woo! Of course my body clock is fairly used to early mornings, and I think I still woke up at about 7.30, but I enjoyed mooching and laying around in bed for a good hour or so after that! This is also the first morning where I didn’t have to worry about packing up and moving on, as I’m staying in this hotel tonight aswell, so it was nice to not have to worry about clearing and packing everything back up.

I also had a lie in due to the fact that today I went to Mulhouse Zoo, which didn’t open til 10 and was only a 20 minute drive from my hotel. I got to the zoo for opening, and while it was only €14.50, which I thought was a very reasonably price, I was determined to get my money’s worth out of the day. I’d packed a lunch on leftovers from yesterday’s supermarket shop, and I was reading for a day of meandering and animal watching.

The zoo itself was much larger than I had thought, despite being fairly central in the city, and I’d only really covered a few of the different animals befor I headed over to the sealions for the morning feeding show; well, it wasn’t much of a show as it was watching the sealions being fed, but they did a few tricks and it lasted a solid 10 minutes or so. Afterwards I continued to wander the park, chatting to the various animals as I went, of course, and I’d covered about half of the enclosures by lunchtime, so I found a sweet little spot by a lake of ducks and flamingos to set up camp for lunch: cheese baguette and an apple. Being a weekday, it was really quiet, and I enjoyed the peace of sitting and watching the ducks for a good 45 minutes or so, before continuing on my way.

After lunch it was a case of more animal spotting; the zoo had so many little twists and turns that it took me quiet some time before I’d hit everywhere; monkeys, meerkats, felines, penguins, I could go on.. I walked some of the enclosures several times because I know different animals are more/less active at different points of the day, and also to kill some time because I wanted to see the polar bears, which for some reason I couldn’t quite translate, weren’t let out until later in the afternoon. 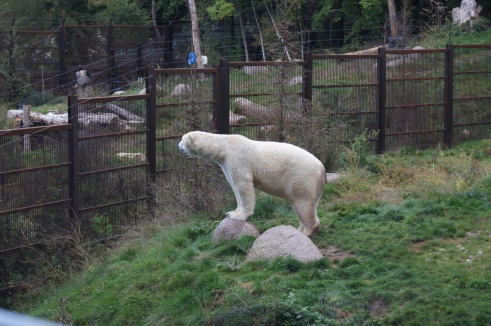 With that, I felt content that I had done everything to be done, having spent the best part of 5+ hours there(!!) and decided to spend the rest of my day at the Musee Electropolis: an electricity and science museum. This plan flopped when I got there only to find that, despite not being mentioned on any of the information leaflets I had collected, it was closed for refurbishment, so I thought I would check out the Cite du Train – train museum – that was just opposite. Now if I was an avid train person, I think I would have enjoyed it, but to be perfectly honest, while it seemed impressive at first, I was soon bored, and although I walked the whole museum (which was actually pretty huge), I soon gave up listening to my audioguide.

Since getting back to my room for the night, I’ve spent my evening sorting the remaining details of my trip; I’ve now got all my accommodation booked, and I’ve actually changed my route through Germany, as well as adding in a day in Belgium before I head to Amsterdarm. Now everything’s a bit more set in stone, I’m pretty buzzed to continue on my adventure! Tomorrow I head into Switzerland, although I’ll be spending the night on the French side of the border to avoid steep hotel prices, so its back to longer drive lengths from here onwards!

For now though, French TV and bed!