I really loved Hong Kong Disneyland – a lot more than I expected I would – and I think I picked up some pretty great goodies.. 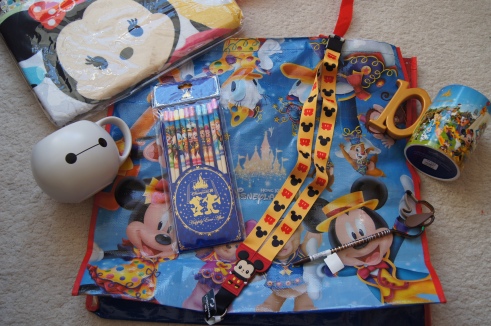 I love a shopping bag, and this 10th anniversary one is huge! I obviously had to get a park mug, and although I think its a little ugly, it had to be the anniversary one too, and I snuck in a Baymax mug because he’s so cute! There’s also a set of 10th anniversary chopsticks and a Slinky Dog pen, and in the top left is a tsum tsum towel that was on promotion at only £10! I’m not a lanyard wearer really, but this reversible Mickey one caught my eye, and I can use it for my DLP annual pass. 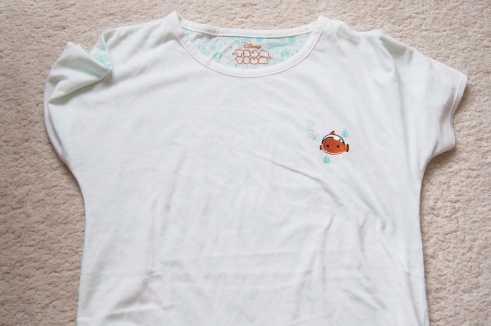 So I bought the Finding Nemo tsum tsum t-shirt because I didn’t really like any of the other t-shirts in the store; it was a little pricey, but I figured I wouldn’t be able to get it elsewhere and didn’t want to regret missing out. And then I went into a different store.. We stumbled across a table of sale items, where if you bought 2 items they would both be 50% off, or 4 items or more would be 70% off – who can argue with that logic? I loved all three of these shirts, and my mum and sister also picked one each, so each top worked out at about £5! The middle one is actually a men’s shirt, but I love that the design includes all the lands in the park, and its so comfy, but I think my favourite has to be the Toy Story pea pod top; I fell in love!

Keep an eye out on my Instagram for a Hong Kong Disneyland giveaway coming soon!