There are a few spoilers here 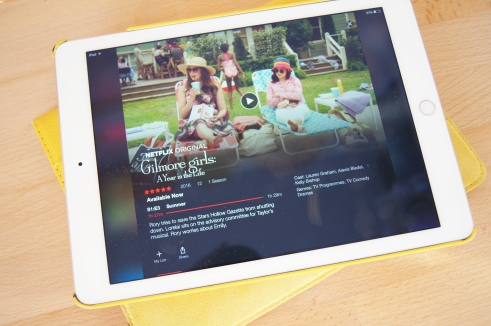 Its been two weeks since the Netflix release of Gilmore Girls: A Year in the Life, and I’ve been struggling over what to write ever since.

I’ve always been a huge Gilmore Girls fan, so this revival was a huge thing for me. I watched all four episodes back to back on the day of release, and was left with my mouth hanging open at that cliffhanger ending (which I had no idea was coming, despite the fact that my mum wasn’t in the slightest bit surprised). I had mixed feelings about the whole thing; there was a lot that I loved about it, but there were also some aspects that I really didn’t, and while I like to keep myself positive, its much easier to write about the things that I didn’t like, so here goes!

I was really surprised to discover Rory had a boyfriend, but what surprised me more was her attitude to him. We’ve always watched Rory 100% commit to her relationships, so for her to have a guy that not only was she not really into in the slightest, but also frequently forgot about and strung along the way she did really bothered me.

Also, I know that Rory has been the ‘other woman’ before, in the case of Dean and Lindsay, I didn’t like that she ran back to Logan, despite his engagement. I know she called it off herself in the end, but I still lost a little respect for her.

Lorelai’s scene after the funeral

I know its a reason for Lorelai and Emily to fall out, but the way that Lorelai acted after her father’s funeral was just not ok. I didn’t find it funny or necessary, and they could have found another reason to add in the scene at the end of the whole ‘Wild’ moment.

The idea was cute, but the show itself was way drawn out..

Don’t get me wrong, I loved that they included so many original characters, but they didn’t need to fit in everyone, and when they couldn’t book Chad Micheal Murray, they could have cut the Tristan bit, instead of showing the back of some random guys head from a distance..

Stars Hollow The Musical aside, I didn’t really see the point of any of the long soundtrack scenes. Take the Life and Death Brigade bit for example: yes, I liked the fact that they brought the guys in and spent a night doing goofy stuff, but the blaring background music did nothing for me and I thought the whole thing was way longer than it needed to be.

A lack of Sookie

Because she was featured in the teaser trailer, I was fully expecting Sookie to be present throughout all the episodes. Now I get that Melissa McCarthy is a much bigger star than she was when the series began, but she was really integral and it made for all those bizarre ‘pop up chef’ scenes.

That cliffhanger had me in shock, and I ran around the house freaking out because it was such a huge announcement. But the more I’ve had time to think about it, the more I think I wish they hadn’t done that. We all know it must be Logan’s, but if the whole ‘full circle’ idea continues, he won’t be around – I mean, he’s engaged and all. The only vaguely rectifying thing is that I hope that Jess becomes Rory’s Luke, and those two finally end up together. I’ve always been Team Jess.

Despite this outburst of negetivity, I did like the revival, but not as much as I always loved the original show. I really hope they don’t just leave it as it is and that they do pick it up for more Stars Hollow madness, but I don’t think I’m gonna be pining for it too much.

What did you think?