Good morning everyone! Today’s port of call was Civitavecchia, also known as the closest port to Rome, and I was super excited to be going ashore for the first time.

After struggling to get out of bed (they’re so damn comfortable!), we grabbed breakfast at Cabanas and then headed out on our own little adventure. Disney had shuttle buses running from the boat into the town, so we hopped on one of those and then walked to the train station to catch a train into Rome, which was only 10€ for a return ticket. The train took about an hour to get into Roma Termini, which meant we arrived just after midday, and with our return tickets booked for just after 4pm, it was go go go!

﻿
We went everywhere on foot, walking first to the Trevi Fountain, via a McDonalds for a toilet stop and with a few quick stops at some of the beautiful squares and buildings we came across on the way. The fountain was, of course, beautiful, but the piazza was also packed with both tourists and street vendors so it was a bit of a struggle getting to the front to sea the fountain, and then to get a photo without someone rudely butting in front. 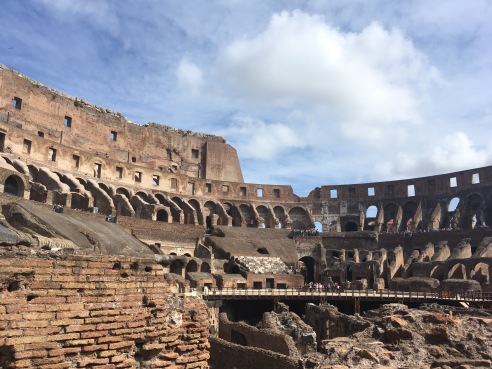 From the fountain we walked to the second big thing we all wanted to see: the Colosseum. Again, the area around was full of people trying to sell guided tour and ‘skip the line’ tickets, but as we didn’t really know who to trust or not, we just got in the regular ticket line, and despite being told it was probably a 50 minute wait, I think it was no more than 20-30. We paid our 12€ and in we went without any fuss at all.

After wondering the Colosseum’s interior, and doing another loop of the outside, it was time for us to start heading back towards the station, but on the walk back we just had to get an ice-cream, cos when in Rome, right? Well when in Rome you pay 7€ for an ice-cream. Ah well, it was delicious anyway! We were back at the station in perfect time, and started the reverse journey back to the boat: train, walk, shuttle bus. There was a minor mix up with the shuttle bus but we were back aboard at 18:15.

Quick shower and change of clothes, and next on the agenda for the evening was the superheroes who were out for the night. First meet was Thor, and then Captain America, both of whom were lovely and very chatty. Dinner was at Animators Palate again and it was another incredible meal. Our servers our so sweet, and tonight they had commissioned the chef to make an off menu dish especially for Sammy as they were worried she didn’t have enough vegetarian options, so they brought out this huge veggie curry for us all to dig into, as well as our own meals, and it was amazing! 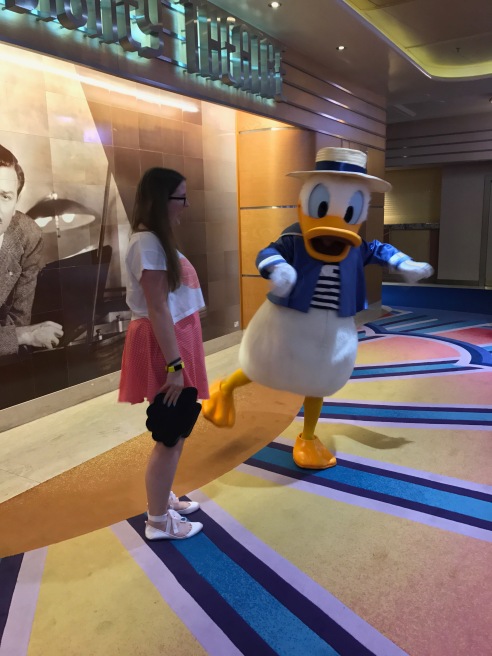 After dinner we rushed to get in line for Spiderman, who again was a very talkative guy, and we met up with Chelsea, Lisa and Carrie while in the queue. From there we all went to meet Donald, and then had planned to go to Fathoms for DJ night, but it seemed the karaoke had run over so instead we decided to postpone our late night antics for another day, all opting to go to bed instead.

What can I say, 20,000 steps walking around Rome really takes it out of you!