The Ordinary, a brand by Deciem, has been taking the beauty world by storm, and having seen some big bloggers talking about these products, I decided it was time to see what the hype was about. 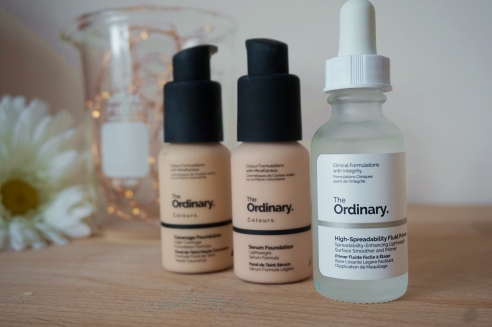 Being the most talked about products, I picked up both the Coverage and Serum foundations, as well as the fluid primer. I would normally never order foundation online without having tested the shades for myself first, but thanks to the very clear shade guide on the website, I pinned it down to two potential shades – 1.1 and 1.2 – and decided to order each foundation in both shades, given that its only £5.90 a bottle. Yes, you heard me.

As well as having the shades based on a number scale, I also loved the fact that each shade was then split into three tones: neutral, yellow and pink. My skin tends to be on the pinkier side, so I got the Serum formula in pink and the Coverage in neutral, and both actually work very well for me. 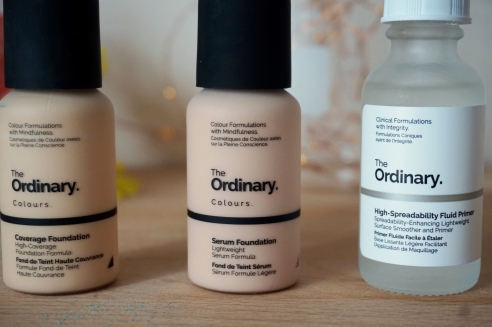 Right from the offset, Coverage became my favourite of the two foundations. The formula is much thicker, which I personally prefer, and as the name suggests, the coverage is higher than the Serum formula but despite both of these facts the product feels really light on the skin.

Like Coverage, Serum has a very lightweight formula and feels like you’re not wearing anything. As I tend to always stick to thicker formulas, I was a little out of my comfort zone with this one, and because of how quickly it blends into the skin, I was finding myself going over it a few times because I wasn’t always sure if I’d fully covered that area, plus the coverage is fairly light. I was also a little out of my comfort zone as Serum leaves more of a dewy finish, and I like to keep things matte.

As someone who isn’t really a fan of primers, this was a game changer. I’m not sure I can sing this product’s praises high enough. If I’m being honest, I added it to my basket so that I had something other than foundation, and so I could tip the basket total to get free delivery, but I am so thankful that I did. The formula is bizarre; its feels kinda gel-like at first but it spreads like a dream and dries within seconds, and once dry its practically weightless.

Part of the reason I’m not much of a primer person, and I’m nervous trying new foundation is that I rarely find anything that can contend with my skin, which can switch from dry as a desert to oily as a 2am kebab within a matter of seconds, and I normally end up regretting wearing foundation by lunchtime, but I did not have a single complaint with this. I tested both foundations both with and without, and both applied so much nicer and lasted the day without any issues when I used the primer.

But seriously guys, I bought 4 foundations and a primer for less than £30, which is what I would normally spend on my regular NARS foundation, plus they’re cruelty free!

4 thoughts on “The Ordinary Haul and Review”