You all know by now that I’m a sucker when it comes to a good highlighter, and despite having a collection of them that I love, I’ll never be able to stop buying the next one that catches my eye. 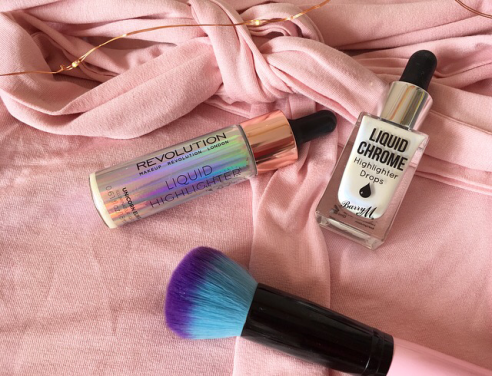 Two of the newest products to have hit the high-street are the Barry M Liquid Chrome highlighter drops, and the Makeup Revolution Liquid Highlighter range, and because I couldn’t decide between the two, I decided to put both to the test! In the interest of fairness, I bought the most similar shades – Moon Potion from Barry M, and Unicorn Elixir from MUR, and here’s how they got on.. 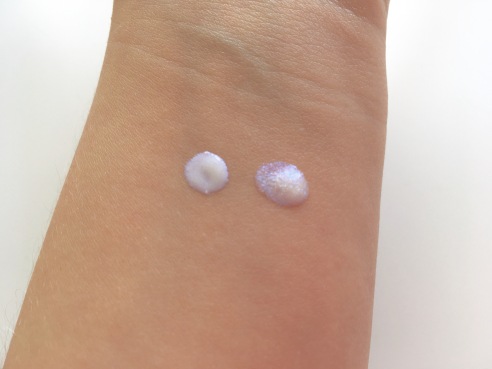 From the swatches, you can kinda see that the Barry M formula is a touch smoother, and has a brighter, more pearly finish than its Makeup Revolution rival, which has a more glittery finish. Both shades are a bright white with cooler blue and purple undertones, although Barry M has a total of 5 shades in the collection and Makeup Revolution have 7, so if these don’t take your fancy then there’s bound to be one that does! I personally wouldn’t use these shades on a regular basis as they’re actually a bit too cool for me, but they would be perfect for festivals or a night out,

Despite both being a lot more pigmented than other liquid highlighters that I use, I was a little disappointed when it actually came to using both of these products. While they look great in swatches, for which I used my finger to spread the product, I actually found both quite difficult to blend using brushes, although I think again the Barry M formula came out slightly on top. I wish that the bottles had built in brushes, like others on the market, but instead they had a sort of dropper system which didn’t make application any easier!

The products are actually only 99p apart in price, with BM Liquid Chrome selling at £6.99 and MUR Liquid Highlighter priced at £6, but as you might be able to tell, I personally would lean towards the Barry M ones in future, just because I thought the formula was nicer, and I preferred the packaging too. Shockingly, however, I don’t think I’d be in any rush to buy either of these again, just because they didn’t overly wow me, and I have plenty of highlighters that do already in my stash.

Have you tried either of these before? I’d love to hear what you thought, especially if you’ve tried different shades!

4 thoughts on “New Liquid Highlighers on the Block – Worth the Hype?”