When Matthew and I were booking our flights to Orlando, our primary concern was getting a good price, and to save some money we were prepared to do a connecting flight. 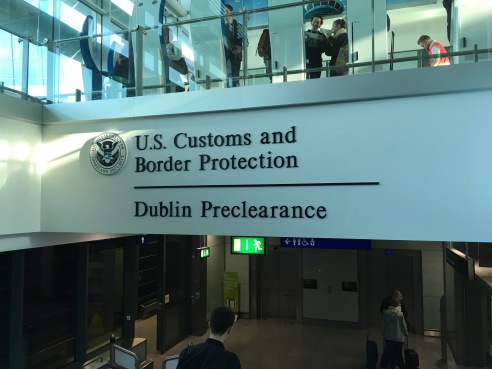 While I would usually fly from Gatwick, southerner that I am, for this trip we could also consider Manchester airport as a setting off point, and we settled on the AerLingus flight from Manchester, that flew via Dublin. Not only did this save us a bit of cash, but would you believe this also saves a lot of time?

Sure, there’s the time it takes to do the stopover, but did you know that when flying to the US from Dublin, you actually go through an Immigration pre-clearance? It went a little something like this..

Upon arriving in Dublin, we followed all the usual signs to transfers, and followed the signs for US Pre-Clearance. Down some steps and round a corner, and you might think you’ve just appeared in a US airport, as you come to a room filled with the same immigration desks and machines as you’d encounter at your final destination.

As we had our Estas, we could go straight to a machine and get the printed receipt, then take our passports to a desk to get stamped, and we were through into the terminal. This probably took no more than 30 mins – and it was quite a peak time at 9.30am!

So what happened when we arrived in Orlando? Well we just walked off the plane and went to baggage claim – job done!

We probably saved about £100 each by doing this stopover, and given that we arrived in Orlando quite late, it was so nice not having to queue for anything, so I would definitely recommend this option, and better still, Manchester should be getting pre-clearance in about 2019!