Today marks exactly 6 months since our two little rescue kitties, Ozzy and Ronnie, came home to live with us. Back then, Ozzy looked like this:

A lot has happened since the last kitten update that I posted, with the biggest development being that they are now also outdoor explorers! 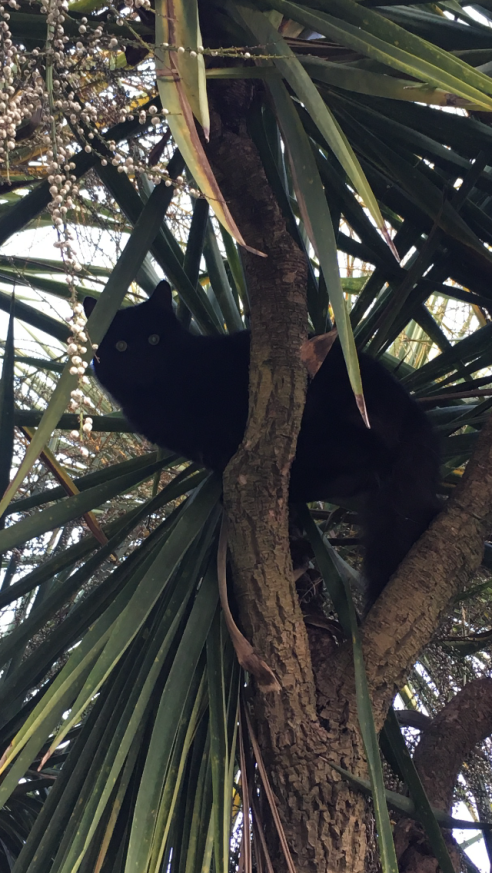 Due to their size, and being black cats in dark winter days, we were maybe a little over cautious in waiting as long as we did to let them outside, starting off with a few short, supervised excursions to the garden, and then once we finally got round to getting their pet insurance sorted and getting the cat flap fitted, Boxing Day was when we let them have free reign over the garden.

It was fairly terrifying at first – more for me than the kittens! – but eventually they learned their way around not only our garden but some of the neighbouring ones, and more importantly, how to get back again. The cat flap, on the other hand, was a slightly more difficult thing to teach.. It took a lot of pushing them through, leaving it propped open so they could actually get back in again, and handfuls of treats, but they finally got the hang out not only going out (which they worked out first) but also getting back in again! We have been locking the cat flap at night to stop them going out in the dark, but they’ve actually got so used to their evening routine of dinner followed by sofa time that they don’t actually seem to have any interest in the outside world past sunset!

Obviously they’ve grown a lot. Ozzy is now the size of most normal cats, but that’s helped by all his fluff, while Ronnie remains the smaller of the two, as he always has been. Personality wise, there’s also been a lot of change; Ozzy has become very confident in terms of exploring outside (including being seen following the local fox around the garden), while Ronnie often sits at the back door and meows for people to come outside and play with him, especially if Ozzy has gone off without him! Ronnie is super needy and loves being around humans, and while Ozzy is still the more timid of the two when it comes to interaction with people, he’s come such a long way, and I pick him up for cuddles every day.

I don’t think any of us could imagine them not being in our lives anymore. They snuggle with us on the sofa, Ronnie sometimes sleeps on the bed and Ozzy frequently naps underneath our bed. Even though they love it outside they do still spend a lot of their days asleep inside, probably because its been quite chilly, but also due to the fact that they just seem to like being with us, and we just love that.