I have tried to keep this post spoiler free, but there may be a few minor leaks. 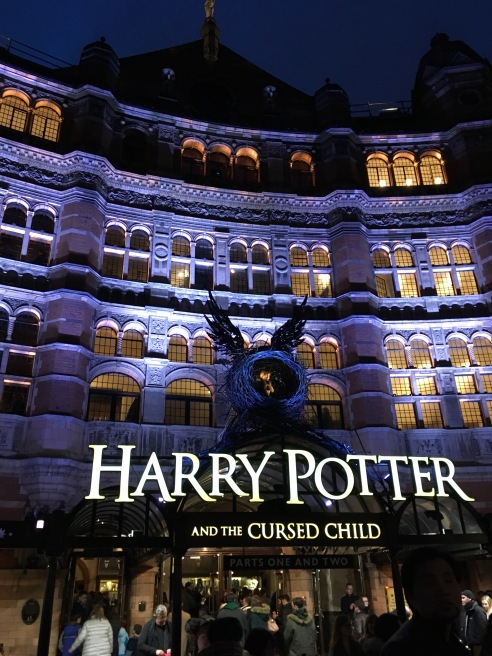 Ok so I am SO late to the party, but yesterday I finally saw the play that everyone’s been talking about for almost two years now: Harry Potter and The Cursed Child.

When the play first opened, I was so sure that I’d never get the opportunity to see it that I did let myself read the book, but given that it was over a year ago, I had only a rough idea of what was going to happen and had forgotten a lot of the detail, so I went in with a fairly clear mind.

We did parts one and two in the same day, and living two hours drive from London, that meant that our whole day was taken up with the show, once you factor in travelling and getting around London and over 5 hours of being in the theatre over the two sittings.

Its safe to say that the show was incredibly impressive. The staging and the special effects were second to none, from curses flying through the air, beautiful patronus charms, terrifying dementors and objects (and people!) flying left right and centre. But aside from the special effects, even just the regular movement of cast and props on the stage was brilliantly thought out, to Hogwarts famous moving staircases to things disappearing with a swoosh of a cape, and I also loved the talking portraits.

The cast also did a fab job, although it took me a little while to get used to all of them – I thought some characters were a little over-acted, but once we got into the second part I’d either gotten used to it or it had been toned down a touch. Scorpius and Albus really were the stars of the show, and what I thought was great was how hilariously funny some bits of the story were, which was something that didn’t seem apparent in the book of the play; the whole audience was in stitches at times.

Personally, my only real negative is that I really felt like it could have easily been condensed into one play, and given how easily I think that could have been done, I think that its a little unfair to make people fork out for two tickets to be able to see the complete story. There were quite a few scenes that felt a little stretched out, some parts that probably weren’t strictly necessary at all and didn’t add much to the play as a whole, and I just thought that you could nip and tuck a few places without losing any of the main story at all, and get it down to a normal, if not slightly longer, single show, rather than 5+ hours that the two parts make altogether. Its my only gripe.

Did I cry though? If you know me even only slightly well, the gauge of how good something is in whether or not I cry. I think I expected to cry in quite a few places, but I didn’t, and that’s not because I wasn’t loving it, its because I was so busy being swept up in whatever emotion the play was making me feel. I did have a little sob though, right near the end, as the cast stood together on the stage and ‘watched’ something that the audience couldn’t see, but we could hear – I’m trying to keep this as spoiler free as possible, but if you’ve seen the play I hope you know which bit I mean. The same part made me cry when I read the book of the play, but hearing it rather than reading it just hit all sorts of emotions and the tears came streaming down. It was the only part that I cried at, but it was probably the most important; it was so well done and I didn’t know how they would portray it on stage, but the way they did it was just right.

I’m so glad that I can finally say that I’ve seen it, and now I know that the book doesn’t do the story much justice at all, so if you have read the book and felt a little meh about it, trust me, watching it is SO much better. On stage it was, well, magic.