Its not May the 4th, and its not any time around a film being released, but I figured I actually didn’t need an excuse to share what I feel like is one of the cutest baking posts I’ve done in a long time. Well, it is actually the first time in ages that I’ve done a baking post, and its my first time baking in my new house, so ok, there’s the excuse!

Like them or loathe them (but seriously, who doesn’t like them?!), Porgs sorta stole the show in Star Wars: The Last Jedi. Fun fact: the porgs were actually created as the island that the scenes were filmed on was populated with a whole load of puffins, and it was easier to CGI the porgs over all the puffins than it was to remove the puffins from the shots, so porgs are basically just space puffins. But I digress..

I’ve had the idea for these cute little sweet treats in my head for a little while now, and here they are – they’re a super simple bake and only 4 ingredients too! I always use the BBC Good Food Ultimate Meringue recipe for meringues, as below, but if you have your own go-to meringue recipe you can use that!

Preheat your oven to 100C, and line a couple of baking trays with greaseproof paper. On the back of my greaseproof paper I drew a porg template ready for piping later, but you don’t have to do this.

Whisk your egg whites using a hand or stand mixer until they form stiff peaks, then up the speed a little and add the caster sugar one tablespoon at a time, waiting a few seconds between each spoonful. Once the caster sugar has all been added, your mix should look nice and shiny! Sift the icing sugar into the egg mix  one third at a time, and fold in gently using a metal spoon until smooth.

Now how you shape your porg is totally up to you, I used a piping bag but I imagine you could do it no problem using a spoon. Pipe/spoon your porg shapes onto the greaseproof paper leaving a little bit of space between each one – don’t worry about them being too peak-y or being all the same shape, it gives them character! Bake for 1 hour 30 mins, and then leave them to cool on a cooling rack. 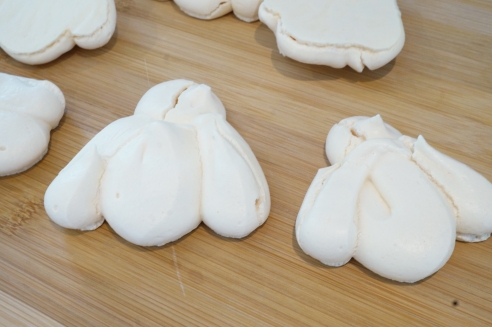 To give yourself a nice flat canvas to work on, flip your meringues so that the flat side is the front of your porg, and now you’ve got yourself an army of little meringue porgs, you’re gonna want to melt down your chocolate. As you’re gonna be dipping, I suggest doing this in a fairly small bowl so that you’ve got some depth.

Take a porg, and working from wing to wing, dip and turn your meringue to create a chocolate border around your porg, then place them onto greaseproof paper to dry. You can then use either a piping bag or toothpick dipped in chocolate to add facial features. Pop your porgs in the fridge to allow the chocolate to harden, and you’re all done! 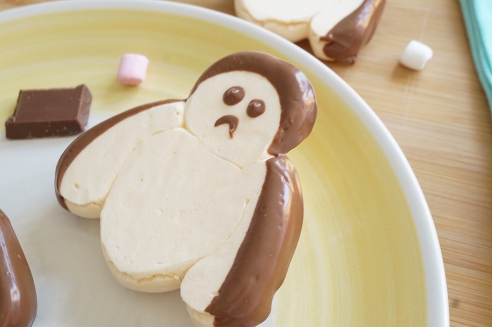 The meringues can be stored in a sealed container for about a week, if they last that long..