This morning’s plan was to start off at Walt Disney Studios Park, and we arrived just as it was opening, having decided to sleep through magic hours. We headed straight for Crush’s Coaster, which had its typical hour wait but we did it nonetheless – in fact, midway through the queue we had the dreaded break down announcement, but it cleared up quickly and we waited no more than 10 mins more than the displayed wait time!

After Crush, we went to grab fastpasses for Ratatouille, and then decided that was it was well past 11am that we’d skip breakfast, do one more ride and then have lunch. The ride in question was one of my favourites, although it seems massively underrated: RC Racer. I was pretty amazed at how busy the park was, as when we walked by Studio Tram Tour the queue was actually out of its designated area and going down past Tower of Terror!

For lunch I had the Spider-Man burger, which was actually really good and so big I couldn’t finish it, and then we went back to Ratatouille for our fastpass time. After that we had planned to swing by Tower of Terror to grab fastpasses for later on, but after we’d got them we saw the wait time was only 15 mins so decided to standby it there and then. Matthew then went off to do Rock’n’Roller Coaster, which is one I tend to skip these days (that made me sound super old but oh well) and I just sat outside and waited because that only had a 10 minute wait time.

We then decided to head out from Studios, and walked into Disney Village – via World of Disney to buy some pins – and grabbed a Starbucks and a sit down before going into Disneyland. We did Pirates of the Caribbean with a relatively short wait time, and then walked through Fantasyland, and by the time we’d got to It’s a Small World it was only a few minutes until Stars on Parade was due to start. I didn’t get the best spot, but did the trick of waiting by the rope that was still due to close, so I was only one person back and she stayed crouched with her kid so I had a fairly decent view. Still not Magic on Parade though, amirite? 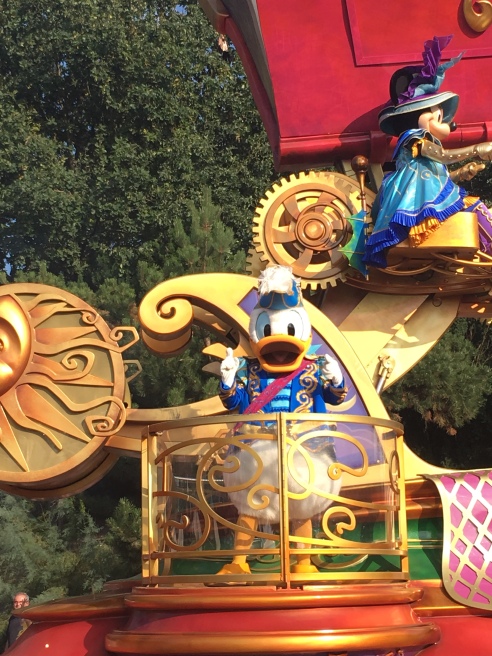 As I saw the parade was ending, we made a run for it before the rest of the crowd left, and took as many back ways as possible to get ourselves back down Main Street and out of the park while the parade will had everyone’s attention! We hopped on our hotel shuttle, but stayed one more stop to get off nearer Val d’Europe, where we then spent a few hours exploring (I’ve never been before!) and finished up buying some bits from the supermarket to take back to our room for dinner, to give out feet a rest from the parks as mine were about to drop off!

We still have two days in the magic so there’s plenty more fun to be had!

One thought on “Disneyland Paris Day 2”