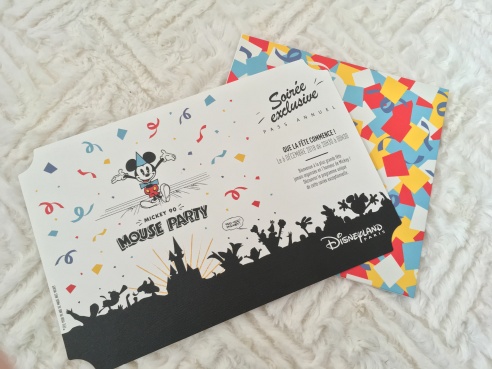 Its so crazy that one month ago today I was having the maddest day in Disneyland Paris! I’d flown out the night before so I could spend just one day in the parks, and so that I could go to my first ever annual pass holder event, which was to celebrate the 90th birthday of Mickey Mouse himself.

I’ve seen to many of my friends go to these types of events before and I was feeling a mixture of excited, nervous and also just not knowing what to expect completely, and now I’ve done it, what did I think?

I think its safe to say that the majority of Disney fans go to these events for the opportunity to meet rare characters, and this definitely showed. Some of the queues were INSANE. DLP had had the good sense to split each queue into two, so that you knew which of the two characters at each location you were going to meet, instead of queuing with the hope of one, and then there being a switch as you get to the front, but it wasn’t very clear in the run up to the event that each meet would be separate. Sure, there were a few meets where I didn’t expect both characters to be together, but when the meets were billed as ‘Nick and Judy’ or ‘Carl and Russell’, a lot of guests were expecting to be meeting with both characters, not one or the other, especially as the queues were so long for most.

The only characters I saw with a minimal wait queue were Clarabelle and Horace, but after I’d spent almost the first hour of the party waiting for Vanellope, I decided that I didn’t want to spend all my party time in lines.

There were a couple of shows and ‘parades’ on throughout the evening. I use ” in regards to the parades because it was essentially just some dancers and characters dancing down Main Street before going up on the stage, and the song for said parade was REALLY irritating – not everyone shared this view, but several people I was with did and it was so repetitive.. The other stage shows that were on through the evening were honestly a bit take it or leave it. I caught part of one of them and wasn’t massively impressed, especially considering how good the Surprise Mickey show that takes place in the parks during the day is, I just think the bar was set too high for me by that show.

The show that everyone was there for was the one night resurrection of Dreams, the firework and castle projection show that was replaced a few years back, and I must admit that it was GOOD. I’d only seen Dreams maybe 2/3 times back when it was on, so I didn’t have too much of a memory of it, but I enjoyed every minute of it! There was also another castle projection show towards the end of the party which was entirely Mickey themed and that was also amazing.

A lot of the rides were open to guests during the party, including Big Thunder Mountain, Its a Small World and Star Tours, and from what I heard, none of them had more than a 5 minute wait – probably because so many people were queuing for characters. The only ride I actually managed to fit in was Star Tours, which was a walk on AND there were only 8 people in the whole ride which was so cool.

I think for future parties, I’ll forgo characters in favour of rides because I loved riding a practically empty ride and not having to queue at all for that privilege, plus I found the character meets a little stressful given the number of guests and not-so-great organisation.

I went into the party with a fairly open mind and no exact plan for anything that I really wanted to do, so I was fairly chilled for the most part, but there were some places were I thought Disneyland Paris really let guests down, and I feel a little ashamed to say that its not something I would have ever thought about before, had I not been with a friend of mine who was in a wheelchair.

The party was not disability friendly. There was no separate line for wheelchair users, so anyone in a chair had to be pushed up and down through the queue barriers under the Disneyland Hotel before the party, and then be crushed by the mobs of people trying to get into the park and run down Main Street. The lines for characters were also not clearly communicated. In the queue for Vanellope, we were told by one cast member to wait outside the line while he organised an alternative queue space, but meanwhile another queue had been created, and despite us being the first there, other cast members then tried to get us to move the the back of the now-insanely-busy queue. I hate how ignorant I have previously been to these matters, but I hate more how Disneyland Paris do not cater to all abilities.

Aside from this, however, I didn’t think the organisation was too bad. After being let into the park, each guest was handed a programme for the night and a limited edition print as a little gift, and there were cast members lining Main Street USA cheering and high-5ing guests as they walked in, I guess as also a little bit of crowd control!

And as far as I’m aware, everything else went off without a hitch! I had a good night with good friends, and I think I’ve learnt a lot about how to handle these events in the future. I don’t know if I would go to every party they hold but I’d definitely go back for another!

There was an error retrieving images from Instagram. An attempt will be remade in a few minutes.