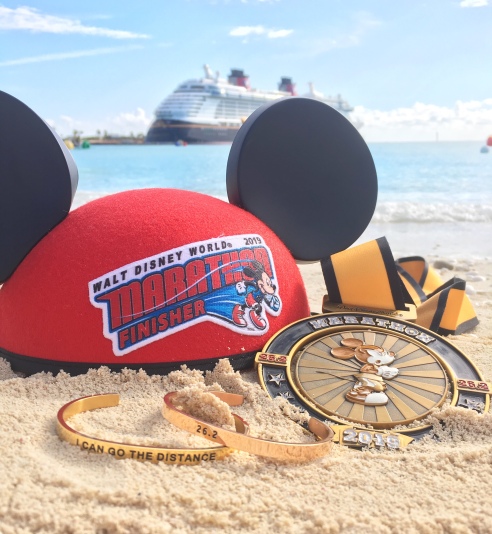 On the morning of the marathon I was up at 3am. Luckily, I’d actually slept pretty well that night, unlike most nights I have before races, so it didn’t feel too awful. As I was staying at Disney’s Polynesian Resort, I had to get the monorail to Epcot – there were no buses on for monorail loop resorts so it wasn’t as busy on the roads – but the building we were in, Moorea, was so close to the Ticket and Transportation Center that it was quicker for me to walk there and just get the direct monorail to Epcot than it was for me to get the monorail from Poly.

Getting the monorail meant I did arrive at Epcot earlier than I was used to and the corrals weren’t even open yet, so after I walked from the station to the RunDisney stage area, I sat down for a little bit so that I wasn’t on my feet for too long, then once the corrals were open I made my way to G and sat back down for the wait. To give you an idea of the scale of this event, by the time I’d got to the start line I’d already done 5,000 steps.

While the race officially started at 5:30am, my corral didn’t actually start until 6:10, by which time I was bursting for the loo having drank a bottle of water while waiting to begin, so I had to stop at the first portaloo on the course, which was about three-quarters of a mile in – although on a full bladder it felt A LOT longer than that!

The course took us straight up to Magic Kingdom, which we entered just after mile 5, and those first 5 miles flew by for me, with the highlight seeing Leah at mile 4 cheering me on. The sun was just rising so the castle looked totally beautiful while we were running down Main Street, and in every RunDisney event I’ve done in WDW, this is the moment I look forward to the most. The Magic Kingdom stretch always goes far too quickly as well – it was actually just about a mile – but just before leaving the park via a backstage area we reached the 10k mark. 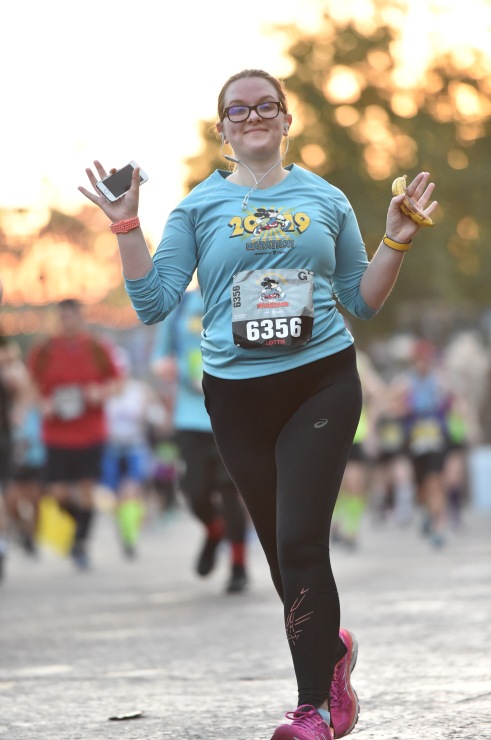 For some reason in basically every marathon photo I am holding a banana (and no, they’re not all the same banana)

The next stretch of the route was the part I was looking forward to the least; it was a full 10k again before we’d reach Animal Kingdom. Despite dreading it, however, this part went almost as quickly as the first quarter of the race. It was all road with very little entertainment, and it was starting to get hotter as the sun had properly risen by then, but I was still in my stride and feeling good, so it didn’t seem like too long until the course took me into Animal Kingdom. We came in at the top of the park, running over the tracks for the train that normally runs guests to Rafiki’s Planet Watch, then down through Africa, into Asia and past Expedition Everest before leaving the park through the back of Dinoland USA. The park was open by this point, and some runners were making the dash off the route to ride Expedition Everest, for which the single rider queue was open exclusively for. The half marathon mark was also inside the park, and despite thinking I would have a little cry at that point, I was focusing all my energy on pushing forward – everything from this point onward would be the furthest I’d ever run before.

In my head, the next stretch of the race wouldn’t be so bad – it was less than 10K until we got to the next significant part of the course at ESPN Wide World of Sports. In reality, this was the hardest part for me. Between mile 16 and 17 my wireless headphones ran out of battery, meaning I no longer had the Hamilton soundtrack to distract me from the blazing sun and 25C+ temperature with no shade, or the fact that being back on the roads meant there was absolutely no shade. This was also about the time that my ankle gave out, and suddenly it felt like each mile had trebled in distance. When I finally did get to ESPN, I thought the time would go by a little faster, but my feet felt like they were dying and there were actually almost 3 miles to run around the grounds, and those 3 miles felt like 30.

From ESPN the course took us up towards Hollywood Studios, where we ran in through the top of the Fantasmic theatre, to the bottom of Tower of Terror and then along Sunset Boulevard and out of the park through the main entrance, and from there we ran along the path that links Hollywood Studios to Epcot via the Boardwalk Resort area. By this point I was so ready for the race to be over, but I was still plodding along as best I could, thinking that once the route took me into Epcot at the UK pavilion, I’d only have a short bit of the World Showcase to run before leaving the park for the finish line. I was wrong. Turns out, we were running around the World Showcase the long way..

Despite having very little of the route left and still running, albeit very slowly, I found the World Showcase incredibly irritating. Epcot guests were in full swing by this point, so only half of the width of the path was coned off for the runners, but guests were still cutting into the running course, and a lot of the other runners were walking by this point, so I was having to do a lot of weaving, which was the last thing I wanted to be doing as I was nearing 26 miles. The course continued to be super crowded and blocked up by walkers almost right up to the finish line, so I was having to dart into any available space until it finally opened up at the finish line stretch.

I’m not even sure if I can put into words how I felt crossing the finish line. I expected to burst into tears but it had been so hot I don’t think I had any water left in my body to cry out. The whole thing didn’t feel real, and I’m not sure it even does now, because running a marathon is not something that I ever imagined I would be capable of doing in my lifetime, let alone with the year I had leading up to it. But I did it.

The plan and motivation for this race was wanting to run a marathon before turning 25, which I will be in October. I’ve always said that it would be my only marathon and that I would definitely never put myself through it again, but now its over, I wonder if I’ve caught the bug..