Up bright and early once again to make use of our Magic 15, we headed round into Adventureland to get in an early Jungle Cruise before the queues got crazy long. Jungle Cruise is new to Tokyo, so really popular later in the day. It’s the same as the American version – over-acting and cheesy one-liners – but entirely in Japanese, so we were clueless as to what was actually being said and just went along with it. It was still fairly quiet after that, so we jumped on the Western River Railroad for a quick loop. Again, pretty similar to its Western counterparts, looping through Frontierland and round Tom Sawyer island, but with the random bonus addition of a tunnel full of dinosaurs.. 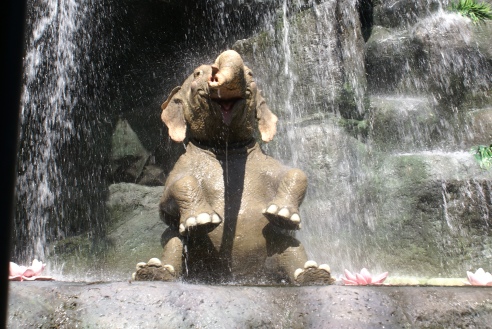 By this time, the park was open and so were the restaurants, so we stopped into Cafe Orleans for breakfast – a seemingly small but incredibly light and filling crepe – before splitting up for the day as Dad and Hannah wanted to go out into Tokyo, while Mum and I stayed in the park. The aim of the day was to hit as many of the bits we’d missed on day 1: Country Bear Jamboree, the smaller Fantasyland rides, Philharmagic, Toon Town etc, and we were pretty lucky with queue times, not waiting more than 30 minutes for anything. We’d already snagged a Fastpass for Splash Mountain for the afternoon, so we headed into the Hungry Bear Restaurant for lunch, mainly because everywhere else was rammed (not that it wasn’t there too!) but the food was actually pretty great: curry and rice in a nice air conditioned room!

By the time we’d got back to Splash, we were pretty chuffed about our Fastpasses as the queue was well over an hour, so we felt pretty smug as we sauntered to the front of the line. I’d definitely say that this was one of the best Splash Mountains of any Disney park! The plan from there was to wander round the World Bazaar a bit before scouting a prime spot for the Happiness is Here parade, but as we picked up ice cream sundaes from Squeezers Tropical Juice Bar, there was a park announcement to say that the parade was being cancelled due to the strong winds; I mean, it was WINDY. I was pretty gutted as this was the one parade I was desperate to see as its they Tokyo equivalent of Festival of Fantasy, but as most of the floats consisted of balloons and inflatables, I could understand the reasoning behind the cancellation. 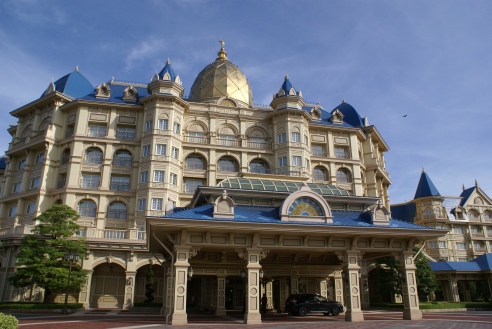 With that in mind, Mum and I headed back to the hotel to chill out for a bit, knowing that Hannah and Dad would be coming back soon for us all to leave for Tokyo together, so we sat in the Dreamers Lounge in the hotel lobby with a drink and cake before going to meet them, and with that our Tokyo Disneyland adventure was over..

I can honestly say that Tokyo blew me away. I expected the same old, but still awesome Disney park set-up, just in Japan, but everything still managed to be unique, from each ride to the atmosphere and the people; it really is a totally different experience, and I can’t recommend it more!

Following our early night, we were up bright and early to hop on the monorail round to DisneySea to utilise our ‘Magic 15’ tickets, giving us early entry to the park, and while some may sneer at the mere 15 minutes extra we were given, it was totally necessary! We headed straight for Toy Story Mania as we knew how ridiculous queues could get, and sure enough, even getting in early gave us a half an hour wait! Knowing how many people would charge our way at park opening, I ducked out of the line for a second to nip across to Tower of Terror (which is right next to Toy Story Mania) to pick us up Fastpasses as I knew that it would also have a crazy wait time after later on, and while I was at it, the park opened and the hoards descended! 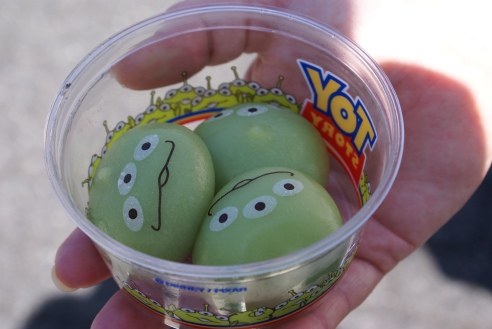 With the two big’uns sorted, we continued on around DisneySea. Now you might be thinking ‘that’s an unusual park name’, right? Well it’s a totally unique park! From American Waterfront, which has a sort of Streets of America feel to it, with a huge classic cruise liner docked at the pier, we moved round to Port Discovery, which has a futuristic feel, then into the Lost River Delta. In a very Epcot World Showcase crossed with Animal Kingdom kind of way, this area houses the Indiana Jones ride, set in a huge Incan temple, and the roller coaster Raging Spirits, which we didn’t fancy due to the full loop! From there we moved on to the Arabian Coast, an entire land that is basically Agrabah, with all Aladdin themed rides and scenery, including the Caravan Carousel, which is double decker!

We moved from area to area pretty speedily due to following our empty stomachs to find somewhere to eat, and from Arabian Coast we went into the Mermaid Lagoon. From the outside, you see a few rides, and then the huge underwater palace of King Triton from the Little Mermaid, but follow the path under the rocks, and you enter the kingdom of Atlantica itself! There’s a whole under the sea area with rides, a theatre and Sebastian’s Calypso Kitchen, which is where we settled down to some food before continuing on through the park. 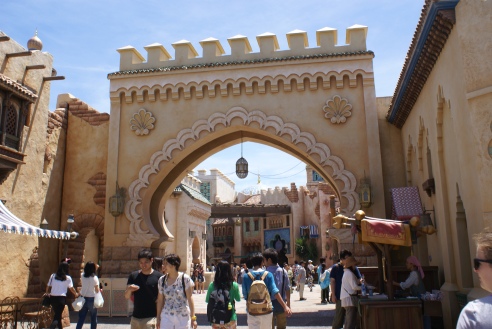 Another of the parks unique features is the enormous volcano at its centre, which is constantly active, spewing smoke and glowing with magma. It houses two rides, a submarine style ride, 20,000 Leagues Under the Sea, which runs through the pools underneath the volcano, and Journey to the Centre of the Earth, during which you travel down into the earth under the volcano, before spiralling up and speeding back down the side, to a great view of the park! By this point in the day it was getting pretty hot, so we grabbed an ice lolly on the bridge across to the Mediterranean Harbour area, and it just so happened that a show was just about to begin, so we found a spot to watch from. Minnie’s Tropical Splash was kind of like a boat parade, with some characters making their way off the boats and into the crowded audience to dance and spray water around, and by that I mean totally and utterly soak everyone in the ‘get wet’ zones. Each of the boats also had water cannons, and they were very liberal with the spraying! 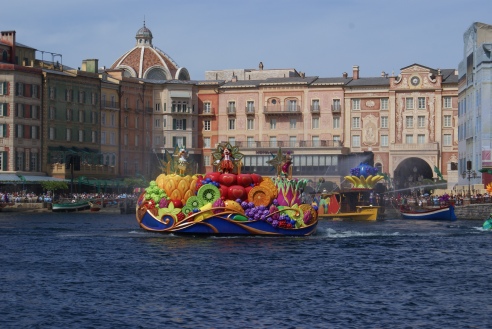 With the jet lag still slowing us down, we decided to head back to the hotel for a little bit, before monorailling back into the park for Fantasmic. Shows and parades are taken pretty seriously out here, with people being allowed to stake their claim of a good spot an hour beforehand, so we got in about 40 minutes before the start, and found a patch behind an empty priority seating area, knowing that there wouldn’t be too many people in front. As an added plus, the cast members ask all guests to remove any hats or Mickey ears so as not to block the views of those behind, which was great! The show itself was set on the main lake of the Mediterranean Harbour, unlike in Disney World where it has its own set, so it was all done on a central floating stage, that could transform into Mickey’s Magic hat, covered in LEDs to show clips from Disney classics, and also have characters stood on top. Maleficent appeared out of another floating contraption, setting fire to the water, with the volcano firing away in the background, and for the finale, the boats of characters circled the central hat. Unfortunately due to windy conditions there were no fireworks, but they made up for that with lights and lasers which were pretty spectacular! 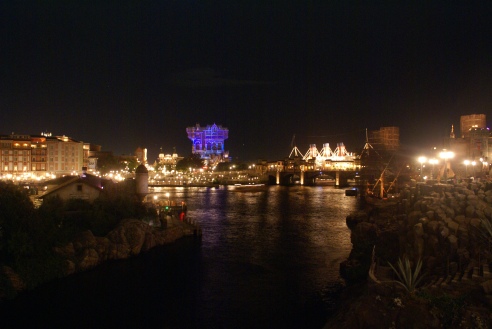 With most people filing out of the park at this time, we jumped on the DisneySea Electric Railway, which runs from the American Waterfront to Port Discovery to see the park all lit up for the night, and wandered back through to Mermaid Lagoon to do a few smaller rides while they were quiet. By this point everyone else was pretty exhausted, so headed back to the hotel, but I wanted to stick it out til park closing so I flew solo for the last hour, hitting up Magic Lamp Theater (with English subtitles), which was just a short pantomime/3D show, before meandering back through the park to get some evening photos and do a little shopping before jumping on the monorail back to the hotel!

DisneySea really is a fantastic park!

So after almost 26 straight hours of travelling, we finally arrived at Tokyo Disneyland Hotel just after 12.30am Sunday morning. I was totally and utterly exhausted, and unfortunately it had all taken a toll on my poor little body, and after just two short hours of sleep I was awake again with stomach pains, and promptly spent the next few hours feeling rough as hell, and heartbroken at the thought of being too ill to head into the park for opening.

Fortunately, it didn’t take too long for my system to flush (if you get my drift!), I scraped a little extra nap and we got straight down to business! 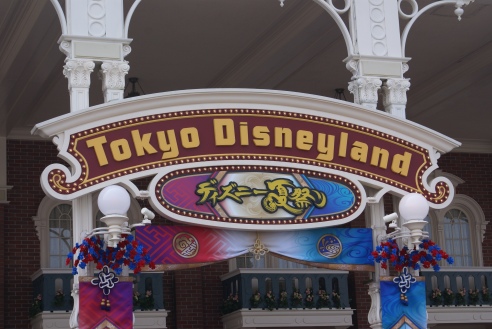 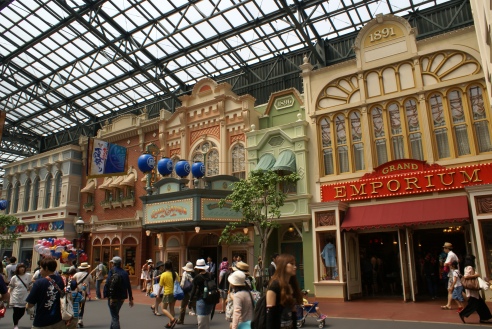 So we’re staying at the Tokyo Disneyland Hotel, which is literally 100m walk from the entrance to Tokyo Disneyland (and also the monorail station that connects us to DisneySea), so we were in the park within minutes, and first priority was breakfast, so we hit up The Great American Waffle Co. in the World Bazaar before starting our park exploration. Naturally, as we were out that way, Pirates of the Caribbean was our first ride, and from there we worked around the park clockwise: Adventureland to Frontierland, to Critter County for Splash Mountain followed by a quick Mickey churro before continuing on to Fantasyland and onwards. 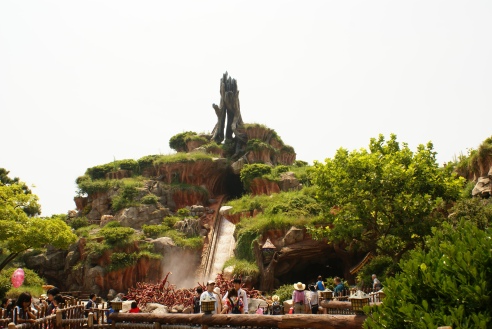 Still running on definitely not enough sleep as a family, we began to flag early afternoon, so we sat down to eat at Queen of Hearts Banquet Hall, a restaurant I’d read about while researching the trip and was desperate to try, and it did not disappoint! Food was on point, theming was on point; we were impressed. 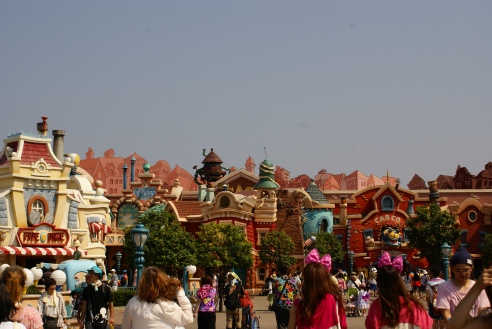 At this point, we decided to take the rest of the day fairly easy; we were tired, feet were sore, so we opted to finish up the main rides, watch the  Dreamlights Electrical Parade, which we did nomming on a Mickey burger (the bomb), and call it a night so we can get a head start on DisneySea in the morning!