Its no secret that Paradise Pier in Disneyland’s California Adventure park is one of my favourite areas of any Disney park, and its especially beautiful at night with Mickey’s Fun Wheel lit to perfection. Its also home to one of my favourite nighttime spectaculars, World of Color, a beautiful show of light and water with the pier as its backdrop, so the World of Color dining package was hugely appealing to me.

The package can be used at three different restaurants, for three different prices, and I chose Ariel’s Grotto, which is situated on the boardwalk of the pier itself. I had no idea that the restaurant was actually on the lower level underneath the boardwalk, and when we were seated outside (there is indoor seating), we were literally on the water’s edge which gave us the most stunning view! 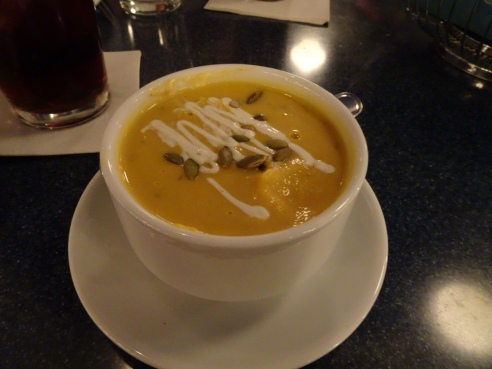 For the dining package, it’s a set menu of three courses. Our waitress took our drinks order and starters – soup or salad – at the same time, and only minutes after she left a huge basket of freshly baked sourdough bread was delivered to the table, still warm! The soup of the day was butternut squash, which is one of my favourites, and it was delicious! It was thick and creamy, went perfectly with the sourdough, and it was a nice manageable portion, although if I didn’t have my main course coming soon I could have happily eaten that all day. 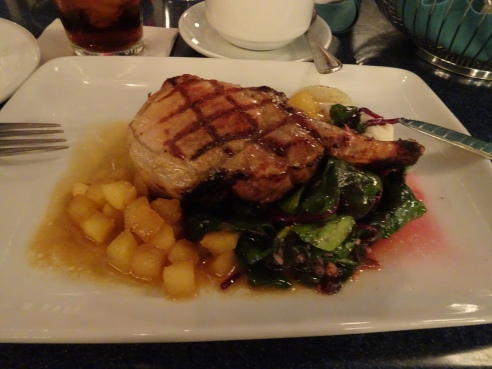 I chose the pork chop for my main, which came with mashed potato and ‘seasonal vegetables’, although this turned out to be a small handful of leaves when I was kind of hoping for some real veggies. It also had an apple sauce which I mostly scraped off – only because I don’t like apple sauce, I’m sure it would have been lovely if I did! The pork itself was absolutely perfect, soft and easy to cut away from the bone, and it was a real sizable chunk of meat. This had me feeling pretty stuffed (although half a loaf of sourdough may also be responsible), so I was pretty upset when the dessert arrived.. 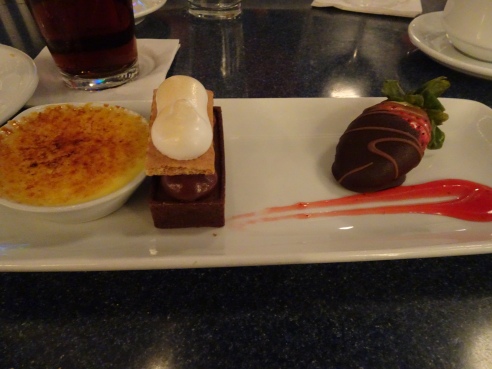 The dessert was a set trio of a mini creme brulee, a smores tartlet and chocolate covered strawberry – hello heaven on a plate! I ate the whole creme brulee, and most of the amazing smores tart before admitting defeat; the strawberry was huge, I think I would have exploded. 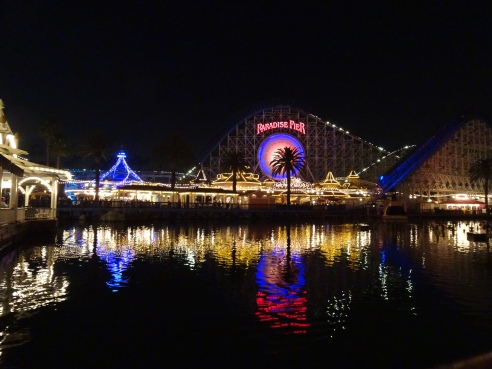 After the meal we sat and fed what was left of our bread to the ducks floating about on the water next to us, causing a few ducky squabbles, and once the bill was paid, our waitress brought us the World of Color preferred seating tickets that were included in our package. These put us right at the front of the crowds for the show later that evening, we couldn’t have got better places if we’d waited all day. The waterfront viewing area was split into a few tiers of viewing areas: those with dining packages at the front, then those with regular Fastpasses etc, which don’t open until an hour before the show. One thing I will say though – if you’re right at the front of the show, you will get wet! (psst, its only mist)

It was about $50pp; Ariel’s is the cheapest of the three options, but you can only book the package for dinner because its a character meal during lunchtimes. For the food you get and the ease of viewing the show, I would definitely say its value for money, especially if you have small children who may not get a good view of the show otherwise.

And if a dining package isn’t for you, go and see the show anyway, its truly spectacular!