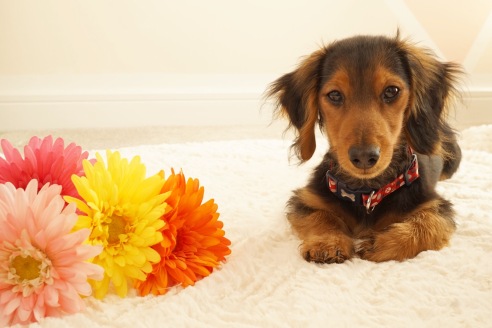 Its now been a whole month since we brought Finn home and our lives were turned a little upside down. Having a puppy in our lives has brought SO much joy, but its also a lot of responsibility and a total lifestyle change.

Because I work from home, I spend pretty much all day every day with this little fuzzball, and we’ve got ourselves a pretty good rhythm, and as he gets older and more used to life by the day, we’re starting to see some improvements in his typical puppy behaviour.

Finn was already sleeping through the night pretty well when we got him, so the only big change for him really was sleeping alone, as he still had a brother and both of his parents with him at the breeder’s. We tried to start him off with tough love, giving him a Pluto soft toy and making him sleep in the utility room by himself, but this was all a little too much too soon, and that night did not go exactly to plan.. We decided that as he would ultimately be sleeping in our bedroom with us anyway, that we would move him upstairs for his second night, and this resulted in his bed being right next to my side of the bed, and I spent the first week sleeping with one arm dangling off the side of the bed so that he knew I was there! He does now, however, sleep in his bed on the other side of the room from us with no problems, and he’s gone from waking up at 6/6.30am to sleeping until at least 7am – yippee!

Despite having no issues with using puppy pads before he came home with us, once in the house, he completely disregarded the ones we put down and did his business wherever he was caught short, although he would also take himself to the back door when he needed to go BUTTT in the last week he has become amazing, and has only had accidents when we didn’t get to the back door to let him out quick enough – he sneaks off there sometimes while I’m working!

No surprises here, Finn is a dachshund who loves his food! He’s on Tails.com food, and has advanced from needing 3 small meals a day to 2 bigger meals. He loves treats, especially denta-stick type chews, and although at least 90% of the time he’s strictly on dog treats, he does enjoy a little bit of sausage as an extra special treat.

Honestly, he naps A LOT. Most of the day when I’m working, he’s either curled up asleep under my desk or playing with his toys in my office, most of which have been thoroughly chewed now.. He has what I call ‘psycho hour’, normally between 5-6pm where he runs around like crazy for no reason, which can drive me a bit mad when I’m trying to finish up my work for the day, but is mainly just funny to watch. He spends his evenings curled up with us on the sofa, and then I normally go up to bed and he stays downstairs with Matthew until he comes up. He’s even got pretty good at when Matthew comes in from work in the early hours of the morning.

Because of his vaccinations, we couldn’t walk Finn for the first 10 days he was with us, but now he’s getting the hang of it. Most days its just a trip to the post office and back while I’m posting orders, but last weekend during our visit to Bournemouth he spent some time at the park and at the beach and he sat nicely in two different dog friendly cafes while we had breakfast!

He is super friendly and gets so excited meeting people, but he’s still getting the hang of meeting other dogs. He barks a lot when he sees other dogs from a distance, or hears dogs barking, but up close he does calm down – he just needs to get a bit more social!

I just can’t believe how lucky we are to have such a beautiful puppy, and I now can’t imagine life without him.

I know things have been a little quiet on here lately, but they’re about to get a whole lot louder as Matthew and I adopted our first puppy on Monday! Everybody, meet Finn.. 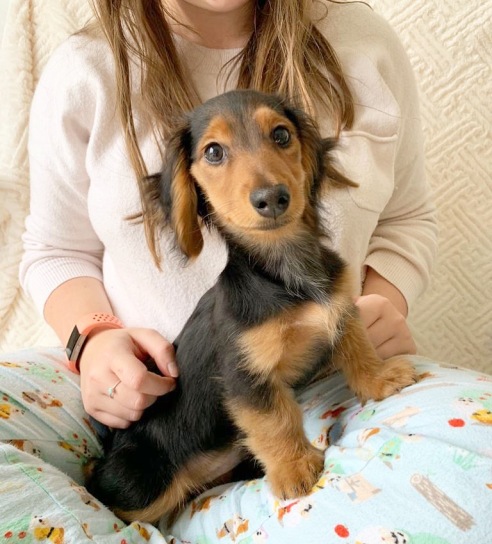 Finn is a miniature long-haired dachshund puppy, he’s 15 weeks old today and we are already so in love with him.

Truthfully, this all happened rather suddenly. Matthew and I have talked about getting a puppy since we first got together, but of course we always knew that it wouldn’t be possible until we got our own place, and then when we first moved into our house there were still a lot of reasons that we didn’t get one straight away. Finally, we settled on waiting until after we came back from our holiday in January, but last weekend I decided to torture myself by looking at puppies online, and that was when we found Finn.

I grew up with two dachshunds, both miniature long-haired, so part of me always wanted another sausage, and it didn’t take much to convince Matthew of the same! Most of the dachshund puppies for sale whenever I’ve looked have been short-haired or wirey, so as soon as I saw a listing for long-haired pups I had to show him, and I in no way was expecting him to respond with ‘ok, I think we’re ready’! So we went to meet him the following day, and were back the next day to pick him up! He was one of a little of five, with just him and one other brother left, and to make things even more perfect, his mum’s name was actually Lottie! I mean, that’s just meant to be, right? 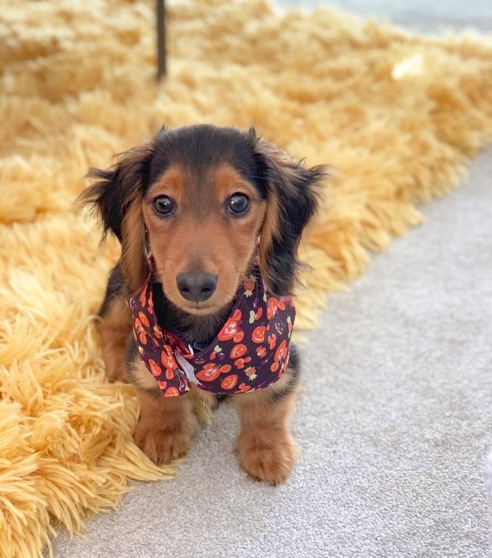 Its safe to say that the last 5 days have been a total learning experience. I suddenly feel like a first time parent, and flit from relaxed and calm to super worried and googling every problem in a split second, but I have to keep reminding myself that I won’t have it all down instantly. We’ve already got toilet training almost down, and sometimes sleep through the night, and most of the time he’s a perfect little angel who loves naps, cuddles, and running/bouncing around the garden. As of Monday he’ll be able to go out for walks, so that’ll be the next big step for him.