Since going on a Disney Cruise, I’ve used the word ‘ahoy’ far too many times but I don’t care.

On every Disney Cruise that sails, guests get to enjoy the festivities of Pirate Night, and this means themed food, a pirate party, and dress up!

Due to some changes in our itinerary, our pirate night actually followed a sea day, so I kept my daytime outfit pretty casual, but still pirate themed, courtesy of this amazing tank top from Maple and Whisky Clothing Co. Pirates of the Caribbean is universally my favourite Disney park ride, and I love the little logo of the iconic dog who has the keys to the pirate cells! 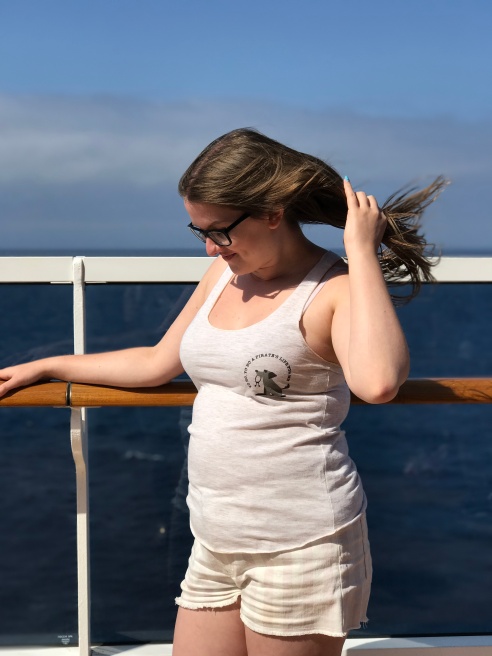 The whole day was crazy blustery, can you tell?!

When it came to the evening, the guests weren’t the only ones who were dressed up! Mickey and the gang were all out in their pirate best and looking super adorable, and I also got to meet Captain Jack Sparrow for the first time ever!

My pirate costume was thrown together last-minute, but I still love how it turned out! I took inspiration from Minnie Mouse, and paired my Minnie skirt with a flouncy blouse and just tied a triangle of black fabric around my waist. Each guest is given a pirate night bandana, so I just tied mine around my head to keep my hair in check!

After dinner is the main event of the evening: the on-deck pirate party! The wind wasn’t letting up at all, so we were actually wrapped up in fleece blankets to watch the show, which featured Mickey and the gang, plus some troublesome pirates lead by Captain Hook and Smee, but Mickey soon got everything under control!

Once the show was over, Mickey announced the start of the fireworks – did you know that Disney Cruise Line ships are the only ships that have permission to let off fireworks?

It was such a fun night, and it was so nice to see so many guests get involved with dressing up! All themed nights on Disney Cruise’s are optional, and on the formal/semi-formal nights there were a lot of people that didn’t dress up, but we hardly saw any guests who hadn’t made some sort of attempt to get into the spirit of things!

So today was our unexpected sea day. Long story short, due to adverse weather it was decided on Wednesday night that we would be unable to stop at our planned port of Villefranche, and instead we would spend the day at sea and instead spend Friday, which was supposed to be a sea day, at Marseille.

This meant we could enjoy a lie in after our disco antics of the night before, and although we had planned to have room service for breakfast, we stupidly didn’t check the correct procedure for ordering so instead we had to go to Cabanas. Due to the schedule change, the onboard activities were also shuffled around, so our pre-booked princess meet was now today, and having a bit of time between breakfast and that, we took the opportunity to do more browsing of the two gift shops.

The four princesses were the same as we’d met on our first sea day – Rapunzel, Tiana, Belle and Cinderella – and we’ve met them so many times now that they all recognise us! After the princesses we went to meet Spiderman again (who also recognised us), and then we split up for a little bit as Sammy went to change and Sarah went to sunbathe, and I took the chance to explore the ship and take photos of as many things as I could, then went to meet the girls up in the adults only part of the deck, where I found them sat with Chelsea and we enjoyed some drinks, sunshine and chatter. 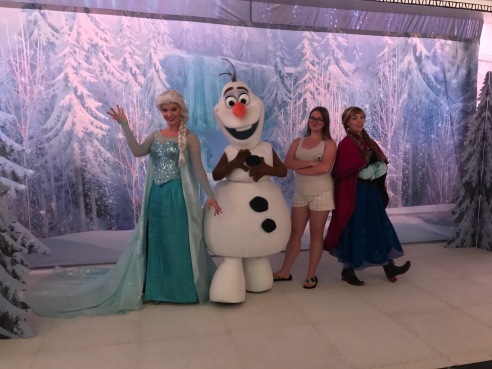 It was past 2pm when we decided to get some lunch, opting now to sit in a slightly more sheltered area as the wind as sea was causing major hair issues. Once we’d eaten, Chelsea left to go to bingo with her family and we headed to our other pre-booked meet with the characters of Frozen. This was set up in Animator’s Palate, and I was so excited when we walked in as having just expected to see Anna and Elsa, Olaf was also there! Warm hugs were had all round.

Did I mention it’s pirate night tonight?! Every Disney Cruise has a pirate night, and this means dress up! We got changed after the Frozen meet, then started the usual routine of trying to squeeze all the characters into the evening as today they’re all kitted out in pirate attire. We met up with Chelsea and Tilly to do the chipmunks, then they went to do Minnie while we attempted some outfit photos, then reunited for Mickey, before going to the theatre for tonight’s show which was a musical showcase from Broadway performer Josh Strickland. 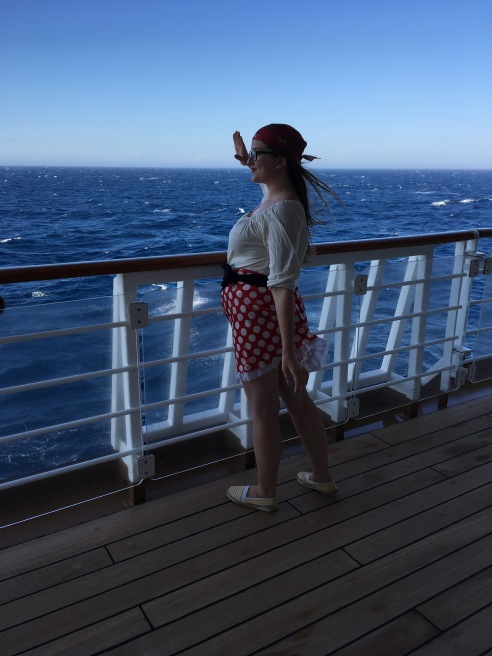 After the show, the rush was on to get to all the characters we wanted to see, but after realising just how long some of the lines were tonight, it became apparent that this wouldn’t be possible, so we settled for just seeing Minnie and Captain Jack Sparrow before dinner, which was at Lumiere’s. Our servers rushed the service a little bit to ensure we had time to get a good spot for the Pirates of the Caribbean deck party, and when we got up there we were so grateful to be handed blankets as it was so windy on deck! 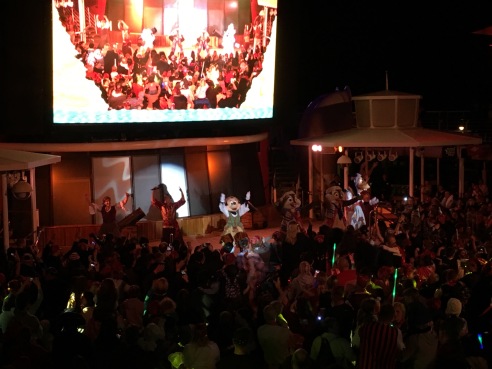 The show included Minnie, Goofy and the chipmunks, all in their pirate best, but it was overrun by Captain Hook and Smee so Mickey just had to come to the rescue! Once the ship was saved, we celebrated with the fireworks show – did you know that Disney Cruise Line ships are the only ships in the world that are allowed to let off fireworks? Disney had to get special permission!

Once the fireworks had ended, most people headed for the bonus buffet at Cabanas, but instead we opted to go to Fathoms to see the performance group Junnk. We weren’t sure how interested we would be in them but the whole performance was actually hilarious, especially when Sarah was picked out of the audience and serenaded! After the show, Fathoms once again turned into DJ night and we partied until the tiredness set in.

Tomorrow is our last day on the boat, stay tuned!