As I began another year packed with RunDisney races, I decided that much more time this year would be spent stopping for some of the amazing character opportunities on the race routes, and this kicked off with the Princess Half Marathon weekend back in February.

I took part in the Glass Slipper Challenge; 10K on the Saturday and half marathon on the Sunday, and kept note of everyone who I saw for you nosey bunch to see who was out! (I joke, you being nosey makes my blog what it is) 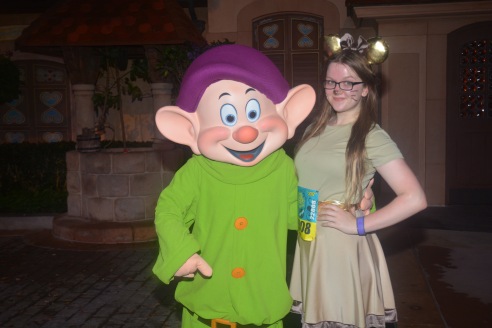 The Princess Half Marathon:

It was so much more fun stopping to meet characters during these races, it really does make every mile more magical!

Yesterday the event information for the RunDisney Princess Half Marathon Weekend was released!

While I hadn’t forgotten, what with my trip getting so close now, my stomach actually did a turn when I got a text from my dad while at work to tell me that the event guide was live, and all of a sudden everything became very real and I actually got a little overwhelmed when I got home and it was time to check all the info – especially finding out my bib number, and ultimately my corral.

If you didn’t already know, I’m running the Glass Slipper Challenge, which consists of the 10K on Saturday 25th and the half marathon on Sunday 26th. I’ve run a weekend challenge before, at the Star Wars weekend in Disneyland last year, and I’m excited but also a little nervous to be participating solo this year, having previously raced with my dad.

Despite the slightly over-complicated route to get all the info I needed – downloading my waiver to find my bib number, then finding the corral listings – I let out a huge sigh of relief to discover that I’ll be starting in Corral G, the 2:25-2:36 finishing time. Its exactly where I wanted to be; close enough to the beginning that I’m not waiting forever to get across the start line, but also not surrounded by people running a much faster pace.

I was also really curious to see the course maps. I’ve run the half marathon course at WDW before, and I was sort of pleased to see that its the same route as last year as I know what to expect: start in the Epcot car park, run up to the Magic Kingdom, then back via the road by the golf courses and finish up in Epcot again. I was, to be honest, more interested in the 10K course as its not a distance I’ve done in Florida before, and I’m pretty happy with that too – its similar to the 5K route I ran last year, just with a longer stretch outside the park at the start of the race, and an extra loop around the Boardwalk as part of the World Showcase stretch.

It feels like forever since I last wrote about RunDisney, especially having spent the majority of 2015 blogging my training for last years races, but I’m really very excited to be racing again this year as part of my upcoming trip! As per usual, the best way to follow my adventures will be on Twitter and Instagram, and if possible again this year I’ll also get back onto Periscope for live course updates!