We’ve all heard the news: Disney is going to be taking us to a galaxy far, far away with the announcement of two Star Wars lands, one in WDW and one in Disneyland. Now all we’ve got to do is wait another who knows how long for them to be completed. Ugh.

The problem is, with the recent release of Episode VII, Disney has just created a whole new generation of Star Wars fans eagerly awaiting the next installment, and of course these spectacular new areas of the parks, and, clever little people that they are, they have made sure that these fans are not disappointed! So what have they got going? 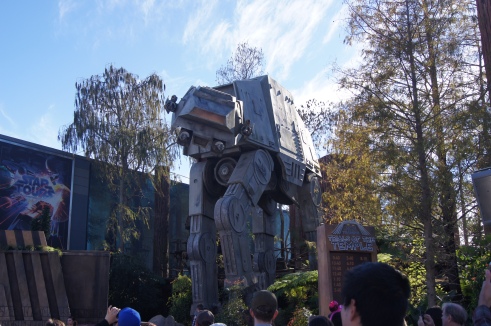 Star Tours is a travel company offering destination holidays to everyone in the galaxy, but unfortunately due to some issues on Flight 1401, your trip turns into a bit of a mission, uh-oh! Its a 3D simulator, and the rides have been in the parks for a few years now, but those wonderful Imagineers have given them a little tweak!

Now including scenes from Jakku, and a message from Finn and BB-8, the ride actually has 50 different variations; there are slight differences in the opening scene, ending scene, and a few differences in the middle, and there’s no telling which one you’re going to get! In January, we had about 4 different experiences, I wonder how many times you’d have to ride before you saw them all!

You can ride Star Tours in Hollywood Studios in WDW or Tomorrowland in Disneyland.

The Launch Bay is one of the newest Star Wars additions to the Disney parks. Inside you can see memorabilia from the movies, such as Rey’s speeder, collections of lightsabers and models of your favourite spacecraft, as well as being able to meet some of your favourite characters.. Was that a wookiee I heard?!

As well as Chewbacca and Darth Vader, you might also run into a bounty hunter or have an encounter with a trading Jawa, and you never know, Kylo Ren might make an appearance!

If your little ones dream of joining the lightside, you can sign them up to take part in the Jedi Training Academy shows which happen throughout the day at both Hollywood Studios and Disneyland’s Tomorrowland. Its adorable; first each little Jedi gets given a robe and a lightsaber and are walked out to the stage area in a big procession. Once on stage, they’re taught a fight routine which they’ll suddenly have to use against Darth Vader or The Seventh Sister, and the moral of the story is to stand up to your fears.

Each show has limited spaces, so sign up early in the day to avoid disappointment. Your child must be present when you sign them up, and its open to all between the ages of 4-12.

Path of the Jedi

Path of the Jedi is a short film essentially telling an abridged version of the initial six Star Wars films, and a series of non-spoiler clips from Episode VII, summing up the history of the Jedi, and what the future may hold!

Disneyland’s Space Mountain has been influenced by the force with a little revamp, and a lot more adventure! Its the same ride as before, but the addition of lights and projections within the ride have transformed this in-the-dark rollercoaster into a rebel mission against the galactic empire, and watch out for those tie-fighters!

Don’t forget to grab a Fastpass early in the day to shorten your wait time!

Disneyland is ahead of the game with their Star Wars inspired food, dedicating a whole restaurant, Galactic Grill, to it. The menu includes First Order burgers and Darth by Chocolate dessert, and you can even have your meal served in a Han Solo in Carbonite bucket!

Hollywood Studios has a good range of Star Wars cupcakes, but that’s about it for the moment! 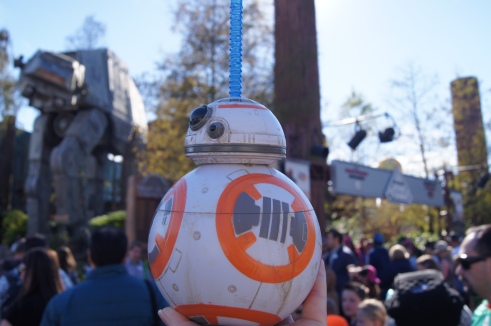 As expected, Star Wars merchandise is everywhere throughout all the parks, everything from clothing and accessories to comic books and annuals, you can even buy a 4ft tall Stormtrooper! As well as being in most shops, there are dedicated stores such as Watto’s Grotto and Tatooine Traders in Hollywood Studios and Mickey’s Star Traders in Disneyland.

Are excited for the new Star Wars lands?